Building this transmitter was a bit of a comedy of errors. Bill Meara, N2CQR, recommended this circuit in my hunt for a transmitter on 12v with a RF amplifier in tow. Bill sent me the schematic, but it took me several weeks to get started. After deciding that I'd like to build this using the Manhattan Technique, I had to find some PC boards. I had a few, but they were cheap--they really shattered when I attempted to cut them down. I was also missing a few parts, of course. And there's also the fact that my time is not my own.

I also credit some delay to trying to visualize the enclosure that would contain this circuit and vice versa. I never solved that last step instead opting to keep the circuit exposed for now. If I get the right performance, I might re-envision the circuit and squeeze it into a circuit for a SOTA outing. I then saw this short vid by the veritable Paul Taylor (VK3HN) which further cemented my plans to spend time to layout the circuit before I melted any solder.

I started by redrawing the layout several times. Doug DeMaw's book, W1FD's QRP Notebook, includes a PC board layout, but I was purposefully trying to layout the circuit mentally and as close to the schematic as possible, limiting my circuit flips and inversions.

I was then all ready to begin when...who grabbed my crazy glue? Another delay.

To be honest, working with the circuit Manhattan Style was nice. I drew a small grid on the board with pencil in an attempt to keep the circuit aligned during the build. 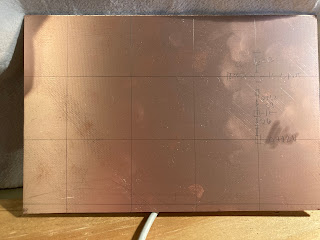 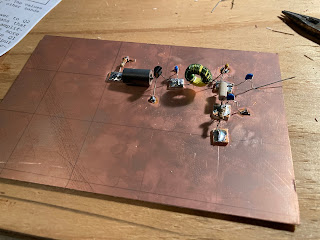 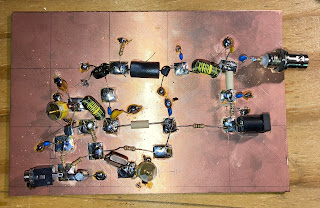 I spent the week of 21-25 Jun checking and rechecking my layout against the schematic. I even melted some solder here and there. I finished the circuit on Sunday, 27 June. I plugged in the antenna jack and key. I added power and...nothing. Darn. I checked continuity of the ground, transistor pin outs, everything.

I emailed Bill Meara who had these thoughts:

Jack: First, try to isolate the problem by stage: Disconnect the amplifier from the power supply and from pin 3 on the transformer. Now, does the oscillator oscillate? Listen on a receiver. Fiddle with the variable cap C1 as you listen. Also C5.
Check the voltages on Q1. Collector should be high, close to 10 volts. Base should be lower and emitter should be about half a volt less than the base.
Is the ferrite bead shorting to ground?
Some of the connections to the copper clad board look possibly cold. I would re-heat all of them and let the solder flow onto the board.
Make sure you have good contact with the enameled wire on your transformers and chokes. It can be tough to get those wires clean. I usually burn off the enamel with a cigarette lighter, then follow up with some sandpaper.
Let me know if any of this helps. 73 Bill

As suggested, I separated the RF amplifier from the oscillator. And, boom, we had oscillation. But it wasn't on 7.015. It was on 7.0135. I found that my filter was too narrow and I wasn't looking far enough away from 7.015. I reconnected the amp and the signal moved to 7.014. No problem. We were back in business.
I checked voltage across the dummy load which indicated 2.038v. Given that:

A quarter of a watt is a little lower than I thought. I hoped to get 1/2 watt out of this. NP. But the signal was very clean. I checked on the scope and found only one small harmonic. A near perfect sine wave.

Here's what it looks like on the Reverse Beacon Network: